It’s a Saturday night somewhere in lower Manhattan, New York City. While partygoers, commuters and tourists scurry by a nondescript building, a few in-the-know slip in. Some wear black jeans, others wear latex, but they’re all heading up a few narrow flights of stairs and may well end up having sex with each other by night’s end (which actually comes in the early hours of Sunday morning.) It’s all quite physical, naturally, but these savvy, curious people are increasingly connected by more technological components than you’d think. More on that in a moment.

This piece is part of CoinDesk's Sin Week.

Some things simply don’t translate into the digital space. You might believe a sex club is one of them, but Daniel Saynt is on a mission to prove that’s just not true. When the COVID-19 pandemic ushered in an era of lockdowns and a national fear of close contact, he seamlessly took his members-only club, NSFW, digital, hosting online meetups that are still popular, even though his real-life clubhouse in downtown Manhattan is back up and running and physical clubhouses are expanding to other boroughs and the organization is in the process of considering cities like Los Angeles and Miami for more. Now, he wants to move even further into Web3: NSFW is branching into NFTs as a means for members to secure access to the club’s physical and digital spaces.

Before we get to that, there are a few things you should know about NSFW. Namely, the acronym doesn’t stand for what you think it does. Rather, it stands for the New Society for Wellness and the organization bills itself as “a members-only social club which caters to socially driven tastemakers and creatives.” That said, at NSFW events, you can expect a lot of sex. You can expect more than that, too, of course.

On a recent Saturday night I traveled to the clubhouse, where workers wore white, guests wore black, beds and swings and toys were abundant, and everyone was extremely friendly. The woman checking members in at the front door gave a verbal rundown of what else one could find in the four rooms ahead, helpfully pointing to the bathrooms and noting which contained a shower and which had a bidet.

In the front room, guests can play Jenga or admire a gallery wall adorned with artistic shots of naked bodies and a print of Rosie the Riveter announcing, “We can screw it!” In the second room, a wonderful bartender named Stephanie handed over a perfect vodka sour, another man sold weed next to a bookcase offering titles like "Cock Paper Scissors"and "Playing Well With Others," and a DJ played music.

We’ve had so many difficulties with MasterCard, Visa, Stripe, PayPal. None of them want to work with us.

The third room, a smaller space with some plush chairs and a swing attached to the ceiling with heavy chains, branches off the second by way of a door hidden behind one of the numerous massive beds, and the fourth room in the back contains more beds and a heavy wooden suspension frame with hooks for ropes. (Some ropes were available but members can, of course, bring their own.) On shelves throughout each room, there are bottles of lubricant and bowls of condoms. To avoid confusion and potential catastrophe, the lube and hand sanitizer bottles are clearly labeled.

CoinDesk sat down with Saynt in the fourth room a few hours before the weekly Kinklab performances began in the second. (This week featured pup and kitten performances; one duo performed in a small kiddie pool as the DJ blasted Doja Cat’s “Vegas,” with its apt, dog-themed lyrics.) Nearby, smokers gathered by a window that looked out onto other unassuming buildings where, presumably, occupants were unaware of what was going on in ours. This is not Daniel Saynt’s first entrepreneurial rodeo. He founded Fashion Indie, an online media network that incorporated Nylon magazine and once had 4.2 million users. NSFW now has more than 8,000 global members and a handful were already gathered at the clubhouse early that evening.

Read More: The Truth About Crypto and Sex Work

The black-clad guests mingled as Saynt explained, “NSFW came about as a place for exploration. It was always a community, in a sense.” What started about a decade ago as a way to bring people together to learn about sex and counteract the messaging from then-popular “50 Shades of Grey,” which depicted BDSM relationships in a way Saynt said was largely “so wrong.” He and his friends wanted to create a space where people could, for instance, learn about Tantra from skilled teachers, or find like-minded, accepting playmates among the roughly 7% of applicants who are accepted after a thorough but quick vetting process that includes reviews of social media presences but as membership grew, they quickly learned how many struggles are in store for entrepreneurs working in the sex space. Traditional payment platforms have been, historically, hostile to businesses and individuals in the sex work, and Saynt pointed to major credit card companies’ stances and the short-lived prude-ification of OnlyFans as examples.

“We’ve had so many difficulties with MasterCard [MA], Visa [V], Stripe [STRIP], PayPal [PYPL],” he said. “None of them want to work with us.” At present, members are joining from around the world, drawn to the digital components, the New York-based playspace, and the promise of physical expansion into other locations. They’ve recently had to secure their memberships through, of all things, Shopify, a Canadian e-commerce company that hosts online storefronts. Saynt sighed over the ethereal beats pumping through the dimly lit space, “We’re not doing anything bad other than bringing people together to teach them about sex. It sucks. We are considered porn. Because it’s sex, we are considered a risk.”

Shopify is cool and all and has certainly helped the club make transactions. Still, this is where he sees possibilities in Web3: “We’re really looking at the future of this company, the future of this community, and saying, ‘Well, what can we do with crypto? What can we do with a [decentralized autonomous organization]? Can we give full autonomy to the organizations and make decisions? Can we have our own currency and work with them?’”

The answer to each question is, of course, yes. This starts with shifting how memberships are doled out, and that’s where NFTs come in. Saynt wants “to have proper, smart contracts” with members, which the NSFW tokens will allow in addition to giving extra privacy to those members who, well, want extra privacy. You can’t take photos or use your phone deep inside the clubhouse because privacy and discretion are at the heart of the venture. The tokens signify membership, with each member holding one, and act as private, secure means of entry to all things NSFW.

The NFTs will limit membership, too. Within the next seven years, the supply of NFTs available to members will be capped. Anyone looking to join NSFW will need to purchase another member’s NFT, like a taxi medallion. Token holders will get access to events, the online community, and the nascent app. (The NFTs will be capped at 100,000. If you are so bold, you can apply to NSFW and get in on the ground floor by clicking this link).

The tokens will be categorized and aligned with the membership structure of the club, which is tiered according to expertise and levels of involvement and access. Accredited dominatrices, for instance, hold certain types of memberships so other members can see who in the community is trained, offering major security for anyone looking to learn the ropes, so to speak. Those who are “travelers” won’t have as much access to all the events, while “keyholders” can see top-level play parties and special events.

“Within the next five years, we’re looking at a global community and multiple events happening in multiple cities,” Saynt said. “We’ll have events hosted by members who’ve been approved by us to host and carry the name.”

As we chatted, the club filled with members who came to enjoy the night’s performances and each other’s company. Saynt departed to make his rounds and and I chatted with some members. They were everyday people, some who traveled for the party and some who worked in the digital space. Everyone expressed interest in the NFTs and DAO; no one in the uninhibited crowd had any reservations about the organization’s move to Web3.

If anything, they approached it how they approach all of NSFW’s events and activities: Even if they weren’t totally sure what it all was, they knew Saynt and his team wouldn’t mislead them, they’d learn as they went, and they’d get all the information they needed from reputable teachers. Their interest in discussing tokens was fleeting, though. They had other things to do.

BUSD$0.99978781
0.01%
View All Prices
Sign up for Crypto for Advisors, our weekly newsletter defining crypto, digital assets and the future of finance.
By signing up, you will receive emails about CoinDesk product updates, events and marketing and you agree to our terms of services and privacy policy. 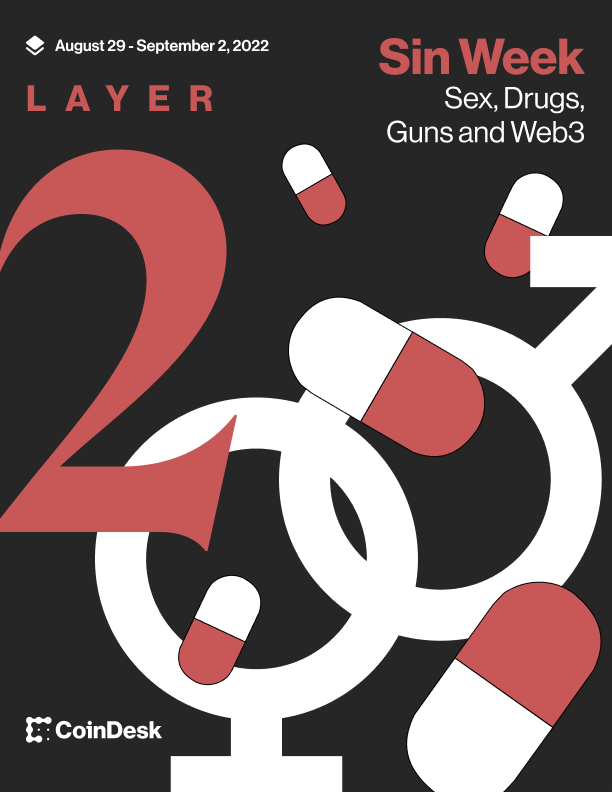