This post is part of CoinDesk's 2019 Year in Review, a collection of 100 op-eds, interviews and takes on the state of blockchain and the world. Lou Kerner is an advisory board member at Blockchain Coinvestors, co-founder of CryptoOracle, and partner at Chameleon as well as Flight Ventures.

MakerDAO started minting DAI in December 2017, and saw dramatic growth in 2018, as the daily supply in circulation grew to nearly 100 million: 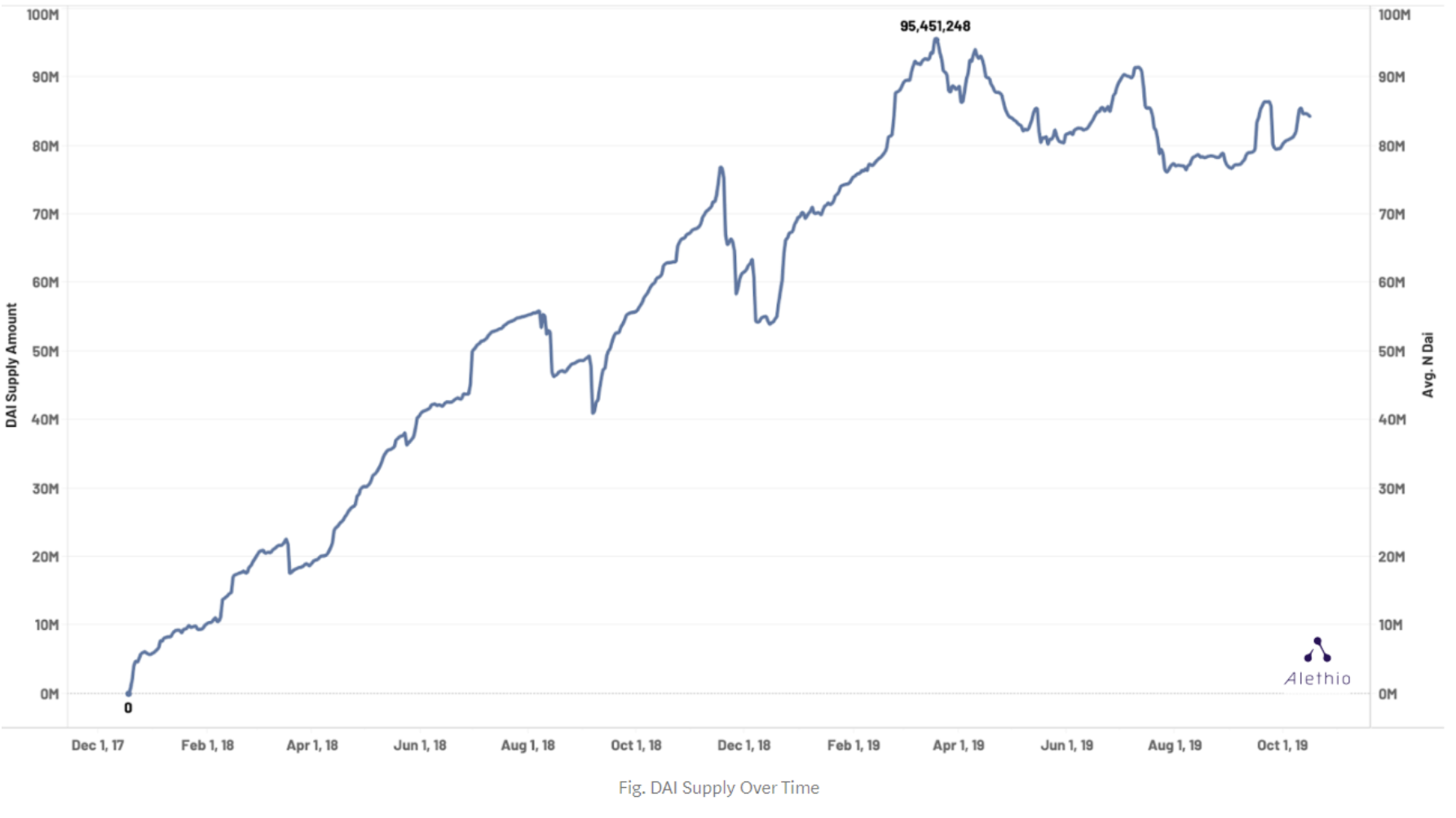 In March, 2019, MolochDAO went live with 22 founding members, each depositing 100 ETH (the equivalent of $330,000 at today’s price of $150) into the decentralized and autonomous grants system. At the Ethereal Summit just two months later, MolochDAO received another 1,000 ETH from both Joe Lubin and Vitalik Buterin, plus 2,000 ETH from a group of individuals from ConsenSys and the Ethereum Foundation. In its first six months, it gave more than $120,000 to 17 projects.

In total, we are now at peak ETH locked in DeFi applications: 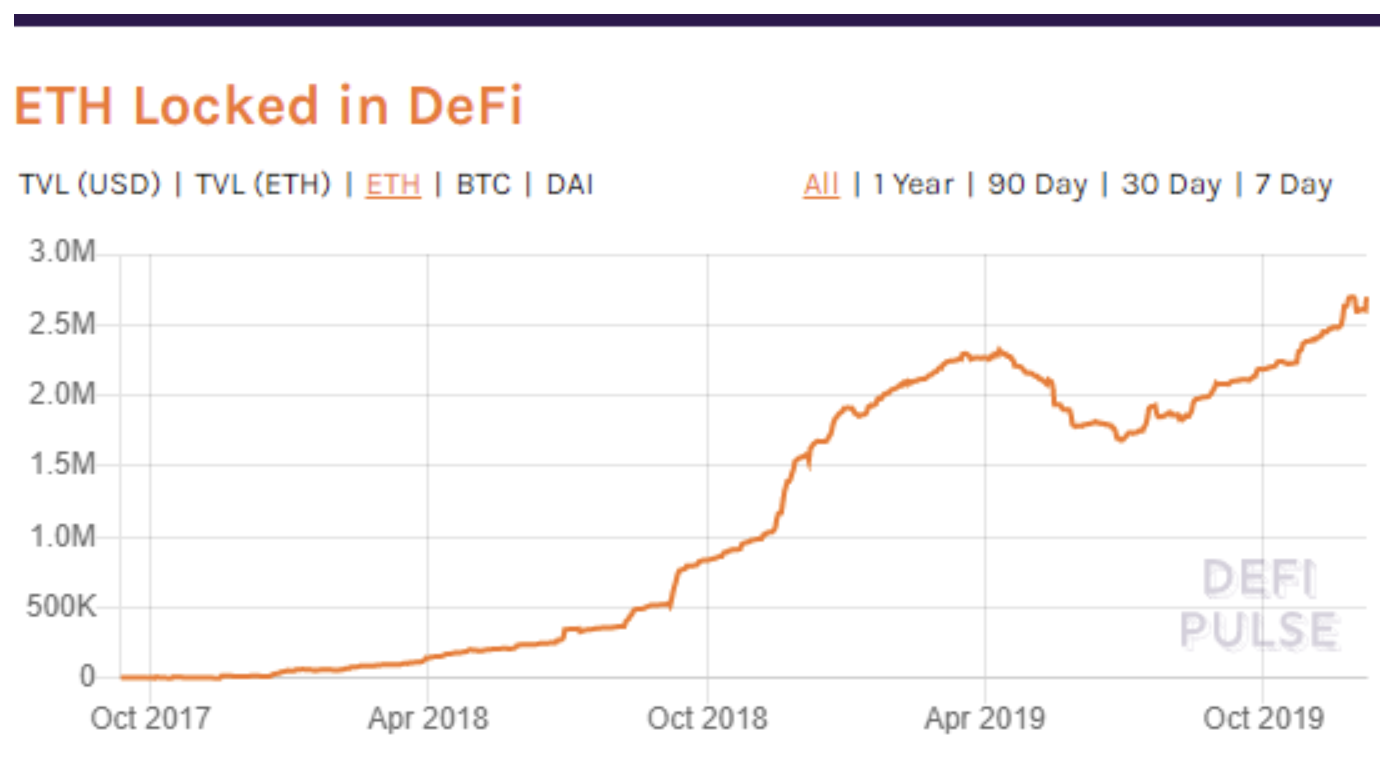 With the majority locked via MakerDAO.

DeFi Is Poised To Drive Mainstream Adoption In 2020

The last three years has seen a lot of  progress. Scaling is being addressed with various technologies including Plasma and Rollup showing great promise. We are seeing an increasing number of viable fiat on-ramps for both institutional investors (e.g. Bakkt) and consumers (e.g. Wyre). We’re starting to see standards set in foundational technologies like zero knowledge proofs (via ZKProof.org). So the main element we need to solve for now, is creating a product that people want. That people need. And there are two simple reasons why I believe that DeFi is poised to create that mainstream product in 2020.

A key aspect of DeFi is it’s composability, which is the ability to combine two distinct services to get a novel third service.  A great example of this is InstaDapp, which created a link between Maker and Compound, increasing the efficiency of the entire lending market by enabling borrowers or savers to easily find and engage with the providers offering the best rates on lending, borrowing and margin trading. And InstaDapp was created at the ETHIndia hackathon, in two days.

With the introduction of Multi-Collateral DAI in November, 2019, we’re starting to see a more robust set of DeFi “Legos” that we can connect together to create products that were simply not possible before. While DeFiers can lock only two assets (ETH and BAT) together to create DAI today, we’re likely to see a proliferation of assets come to DeFI in the coming years, including fiat currencies and tokens derived from real world assets, like real estate. Thus creating more assets that can be connected to create new kinds of assets.

DeFi has a major advantage over incumbent financial and technology companies because they can introduce products without asking any regulators for permission.

If Uber had asked taxi regulators for permission, there would be no Uber.

There is no Libra today because Facebook had to ask for permission because they’re centralized and have a $550B franchise to protect.

If you don’t have to ask for permission, you can roll out a lot more products a lot faster, and are simply far better positioned to find product market fit.

New asset classes are born all the time, providing new opportunities for investors that were not previously available. Take junk bonds. When Michael Milken at Drexel invented this asset, all the other investment banks said they were garbage and would never issue or trade them. But investors wanted junk bonds, and the new class grew quickly, from $1.6 billion of issuance in 1981, to $33 billion just five years later. That dramatic growth was driven by the fact that junk bonds provided a way for investors to get higher yields that were simply not possible before. They found product market fit.

I think 2020 will start to see the introduction of DeFi products that enable investors to do things they couldn’t do before and to invest in ways that were not possible before these new technologies existed. When we find product market fit and build a product that people want, that they can’t get elsewhere, rypto will go mainstream. That’s when institutions “get off zero.” That’s the promise of 2020.

On Starting A Crypto Career In The Dead Of Winter

First Mover Asia: IOTA’s Shimmer Joins the Race to Become the Next Big Blockchain; Bitcoin Seesaws Before Holding Near $19.5K