Distributed though it may be, the EOS community has fought hard to remain united.

As of June, two rival groups were briefly in competition to launch the official EOS blockchain (or mainnet) using code released by the company behind the protocol, Block.One. The standoff was resolved, and the EOS community launched a unified network later that month.

However, in the time since, another rift has emerged, an East-West divide being made worse by a language barrier between Mandarin and English-speaking members, as well as differences in internet availability. Namely, Chinese internet controls – commonly known as the "Great Firewall" – make it difficult for those in China and the West to converse using the same platforms: Western EOS enthusiasts mostly gather on Telegram, while WeChat dominates in China.

The fact that two broadly separate conversations are happening in parallel has made it difficult for EOS to live up to its promise as a blockchain with built-in democratic governance. It's also had tangible effects for EOS token holders, since some have had relatively easy access to dispute resolution, while others haven't.

Dispute resolution emerged as an important theme early on in the network's existence, as many community members had lost their private keys to scams and hacks. While the main arbitration body, the EOS Core Arbitration Forum (ECAF), was a source of confusion and controversy early on, it was at least able to keep some users with compromised addresses from having their tokens stolen.

In the West, at least.

Scammers and hackers targeted EOS users all over the world, but Chinese-speaking users were often unable to access ECAF's service. None of its members spoke Mandarin, and since much of the conversation around arbitration had taken place on Telegram (and in English), many WeChat users weren't aware that arbitration was even an option.

In recent weeks, however, the EOS community has begun to focus on bridging the East-West divide. A new organization, the EOS Mandarin Arbitration Community (EMAC) is working to increase Chinese speakers' access to dispute resolution, and two of its members have joined ECAF.

"I do believe that the language barrier and cultural difference still exists," an EMAC spokesperson told CoinDesk in a statement, adding:

"But with community collaboration I'm confident that they no longer pose as serious issue and we could eventually overcome them."

An 'official language of EOS'

In statements to CoinDesk – sent via WeChat – EMAC described English as "the 'official language' of EOS," adding, "there is no doubt about that."

Of course, EOS users speak a variety of languages, but several sources whose first language is not English said more or less the same thing: for the time being, fully participating in EOS requires English skills. (Indeed, aside from a few pleasantries, the conversations quoted here all took place in English.) 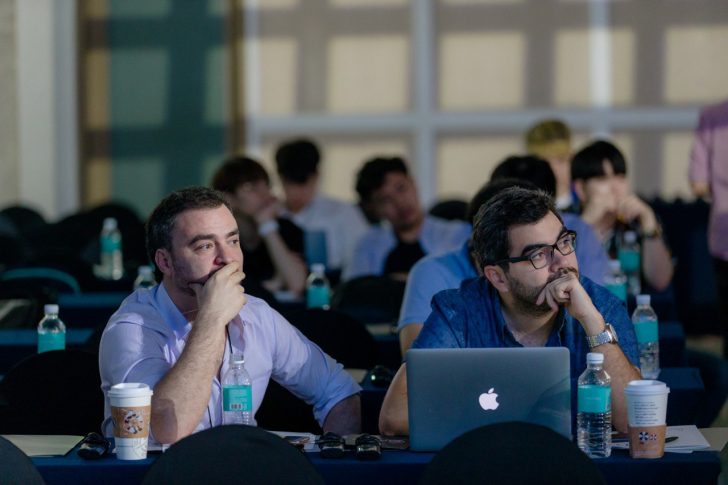 Matías Romeo (left) and Jesús Chitty of EOS Argentina at a meet-up in Seoul.

Korean is generally considered EOS' third major language group. Even so, Orchid Kim, from the block producer candidate EOSYS, said "it has been a basic assumption that Korean community […] has to provide extra effort in various translations in order to be involved in the whole EOS community."

For the most part, according to these block producers, the portions of Spanish, Portuguese and Korean-speaking communities that were interested in EOS spoke at least some English. (It would have been difficult to develop the interest otherwise.)

Today, all three block producers are involved with some sort of translation efforts, which they say are helping broaden their communities beyond English speakers.

Despite representing a Babel of world languages, then, the EOS community outside of China is participating in a more or less unified, English-dominated conversation. And while that conversation occurs on a gaggle of channels, most of those channels are at least on a single platform, Telegram.

While participating in this broader English-language conversation may be challenging for some parts of the community, for those in mainland China, it's been extremely difficult.

"You can't really access Telegram from inside China," said former VP of product at Block.One, Thomas Cox, "so an entire swathe of our constituency was effectively frozen out. It wasn't that we didn't care, it's that we didn't know how to reach them very well."

Moti Tabulo, head of ECAF, also noted the difficulties arising from Chinese internet controls. He pointed out that the use of a virtual private network (VPN) could allow access to Telegram.

Even so, Chinese users may be unwilling to stray far from their country's dominant platform. As Stephen Zhang, an EMAC representative, said in an interview in August:

"WeChat is the tool in China. It's not like Western social media network. They have Twitter, Facebook and different platforms to choose from, but in China WeChat is the communication tool."

Importantly, though, the gulf between EOS' Chinese and Western communities may have an additional dimension, besides language and choice of social media platform. As Tabulo noted, "the concepts can be difficult to translate."

Amy Wan, founder and CEO of the blockchain startup Sagewise, recently gave an example of this sort of difficulty, though she didn't reference EOS specifically: "I laugh when Westerners argue about decentralization. Only a few people in the world really control bitcoin, [ethereum], etc., and they're all in China and don't give a damn about decentralization."

To make matters worse, a recent scandal has thrown fuel on these simmering cultural differences. An anonymous Twitter account recently posted unverified allegations – originating on WeChat – of "collusion, mutual voting and pay-offs that occur amongst the Chinese BP community" (block producers or BPs are elected by EOS token holders and fulfill a role similar to that of miners in bitcoin).

As CoinDesk reported, some people on the English-speaking, Telegram-using side of the community vowed to stop voting for China-based block producers entirely in the wake of these allegations. And in China, "most people are mad with this activity if it is true and the discussion of how to prevent it is very enthusiastic," said EOS Beijing's co-founder, who goes by Sven.

The incident points to the difficulty of building a governed blockchain that spans linguistic and cultural divides. There is an ongoing debate regarding the rules or "constitution" the EOS community should abide by, but it has so far occurred almost exclusively in English and on Telegram.

And of course, as mentioned above, hacks and scams have hit the Chinese EOS community harder than others because, according to EMAC, "very few of Mandarin token-holders are fluent in English to feel confident to directly communicate and interact with ECAF."

The situation appears to be improving, though.

Micheal Yeung of EOS Pacific, a block producer candidate, and others founded EMAC to "promote governance awareness among Mandarin community members and facilitate collaboration between Mandarin and non-Mandarin communities in governance and arbitration," according to EMAC's statement.

The job has been difficult. In July the organization stopped providing direct help to victims of token theft after some of the victims began harassing EMAC volunteers, threatening them and exposing their private information.

Meanwhile, another new organization, EOS Alliance, is hosting calls in Mandarin on arbitration and other topics, in particular the constitution. It is coordinating translations of governance-related documents to Mandarin, as well as working to reduce tensions. For example, it issued a statement on Chinese BPs' alleged vote-buying that warned against "creat[ing] a sense that Chinese token holders or BPs are being unfairly picked on."

Wan of Sagewise has joined EOS Alliance as the head of a working group on dispute resolution and arbitration. She told CoinDesk, "ever since connecting with [EMAC], we've been trying to collaborate and work with them in terms of bridging the divide and not having two discussions but one large, global discussion."

Cox, who is serving as interim executive director of EOS Alliance and an adviser to EMAC, told CoinDesk that the situation is improving rapidly:

"I would say that as of a month ago there was a lot of sense of separation. I would say by now anybody who feels that there's an unbridgeable divide probably was on vacation for four or five weeks."

Still, he added, the attempt to unite the EOS community and keep it united is "an enormous undertaking." EMAC echoed that sentiment, saying, "there is a long way ahead of us."

Of course, EOS is far from the only project to face an East-West divide. As Wan alluded to, there is a prevalent perception that the bitcoin network is controlled by Chinese miners, which often generates resentment in the West.

In other cases, there's an explicit assumption that the West needs one solution, while China needs its own: the smart contract platform Neo is often referred to as "China's ethereum." Nor is that phenomenon limited to crypto: the West has Google, China has Baidu; the West has Amazon, China has Alibaba.

Sven underscored this point when he told CoinDesk that while EOS suffered from a gulf between East and West, "this is not the problem of EOS, it is the problem of the world."

BofA: Coinbase Is Well Positioned to Take Market Share During This Crypto Winter

CoinFLEX Files For Restructuring in Seychelles