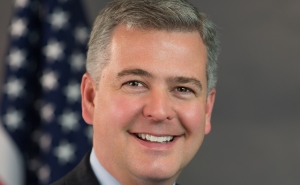 A former commissioner for the Securities and Exchange Commission (SEC) has joined the board of directors for blockchain startup Symbiont.

Dan Gallagher served as a commissioner for the SEC from 2011 to 2015. According to the agency, Gallagher was first hired in 2006, acting as counsel. He went on to become deputy director for its Division of Trading and Markets in 2008, going on to serve as co-director from 2009 to the start of 2010. Prior to being appointed commissioner by the Obama administration, Gallagher worked as a partner for Washington, D.C. law firm WilmerHale, advising on regulatory and compliance issues.

Gallagher is the second high-profile SEC official to transition to work in the bitcoin and blockchain space. Two years ago, startups BitPay and Vaurum announced that former SEC chair Arthur Levitt had joined their respective boards of directors.

Other former government officials have gone on to find work in the space as well. These include Ed Moy, who served as US Mint director under the Bush administration who now advises Bitcoin IRA, and Jamie Smith, a former White House deputy press secretary and special assistant to President Barack Obama who became global chief communications officer for The BitFury Group.

In addition to Gallagher, Symbiont added to its board Todd Ruppert, a former CEO and president for T. Rowe Price Global Investment Services. The startup said that both additions would help the firm as it looks to grow.

“Dan and Todd bring elements to Symbiont’s DNA that will be critical to our mission of making capital markets safer, fairer and more efficient,” Symbiont CEO Mark Smith said in a statement.

First Mover Asia: BTC Holds Near $24K; Why Do We Need Ethereum PoW When We Have Ethereum Classic?

Crypto Options Trading on Solana Has Mostly Fizzled. A New DEX Has a Plan to Change That