Jonathan Levin is a digital currency consultant and entrepreneur. He previously co-founded and served as CEO of Coinometrics.

Payment systems are systems of pipes and valves that allow monetary transfers between people all over the world. To most, they sit insulated from view. Even when in plain sight they evade comprehension. With large responsibility for errors and lack of acknowledgement for progress, there has been little innovation and construction of new pipes. Bitcoin represents a new way to re-plumb the financial system on a decentralised architecture. However, much like the existing financial system, few people understand the consequences of the layout and design of its pipes.

The plumbing analogy fits far closer to bitcoin than normal financial markets. Bitcoins are not coins, indeed there is no concept of identifiable currency units. Bitcoin should be considered a type of monetary fluid with a unit of account: bitcoin. The monetary fluid – bitcoins – flows through a system of pipes (transaction outputs) and fittings (transactions).

Bitcoin is neither an account based payment system or a tokenised banking system. The protocol uses the history of all past transactions to generate a state of unspent bitcoins. When we say there are 13 million bitcoins in circulation, what we actually mean is that the system recognises that there are 13 million bitcoins in unspent outputs that can be reassigned according to the rules of the payment system. The reassignment is irreversible and hence new transactions are additions to the growing complex system of pipes.

The graph of pipes or transactions is largely immutable and therefore makes it amenable to analysis. Pipes are only destroyed if there is a reorganisation on the consensus of the network. The system of pipes is appended only and therefore the complexity and size of the transaction graph grows over time. Bitcoin’s history can be evaluated by looking at the state of the pipes on 1st January 2014 or any block height.

One problem in any analysis is the lack of mapping from inputs to outputs. When warm water comes out of a tap, there is no separation between the hot and the cold. In bitcoin, if two transaction outputs are both inputs in the same transaction, the protocol makes no attempts to map inputs to outputs. Bitcoin retains the information that can reveal the capacity of the individual pipes that were feeding into the fitting. In this way, bitcoin is not a token system but something far more fluid and complex. 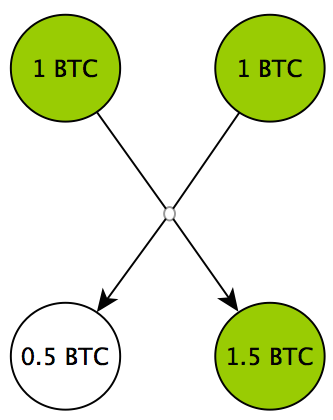 Imagine this transaction was the purchase of a new iPhone 6 costing 1.5 BTC. Now assume that one of the funding transactions used to fund the purchase was a theft. The theft is marked as the orange transaction. Now the difficult question becomes how much of the stolen bitcoin remains in the thief’s possession? Bitcoin the protocol does not have the answer to this. Instead we would have to rely on our legal principles to establish that all of the 0.5 BTC remaining in the possession of the thief was actually the stolen bitcoins. 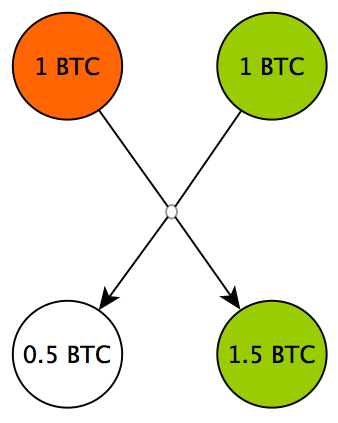 However, usually the minimum flow quickly goes to zero because we need to combine transactions in order to pay our debts. So if I make the payment of 1.5 BTC for the iPhone 6. The minimum flow from each of the inputs to the expenditure is 0.5 BTC. The algorithm places the maximum number of bitcoins, 0.5 BTC, in the change and leaves 0.5 BTC to pay for the good. In the maximum flow case, the amount would be 1 BTC in both cases since the output is larger than 1 BTC. After only a few transactions, it is likely that the minimum flow falls to zero.

In the instance of minimum flow being greater than zero, we can prove that the bitcoins went from the source to the target and we have full traceability. But where minimum flow is equal to zero for all potential outputs, as is often the case, we have no traceability. Even though we can show the connections between all the different transactions or pipes in bitcoin’s history, we cannot say a lot about the flows of funds or monetary fluid. We get transparency but hardly any traceability. The parties that cause the obfuscation can also be identified by their bitcoin addresses and could be subject to adverse claims.

In light of this, perhaps it is a red herring to even think of bitcoins as units of currency and we should be rethinking the way that we speak of “my bitcoins”. Perhaps flows of currency as I have described them should be thought of as simultaneous creation and destruction of interests that are not necessarily tied together (as is the case with some US securities). These issues must be understood in order to develop private law frameworks for bitcoin as well as appropriate anti-money laundering guidelines. One thing is for sure – there are no coins in bitcoin.

This article has been republished here with permission from the author. Originally published on Jonathan's bitcoin blog.

Disclaimer: The views expressed in this article are those of the author and do not necessarily represent the views of, and should not be attributed to, CoinDesk.