In a reddit post addressing the action, Bitcoin Suisse AG stated that in light of the government's request, it has also suspended all other planned bitcoin ATM launches and halted services for its existing ATMs.

Bitcoin Suisse AG told CoinDesk it has further reached out to the necessary domestic regulatory authorities, but that it had no further comment on FINMA's actions.

The company, however, remains optimistic about its ability to provide ATM services to the local bitcoin ecosystem, stating that it expects to have its units online before the end of June.

Notably, the Lamassu ATM installed by Bitcoin Suisse AG for Bitcoin Boulevard in the Netherlands will not be affected, as the company reports it has since sold its ownership of the device. 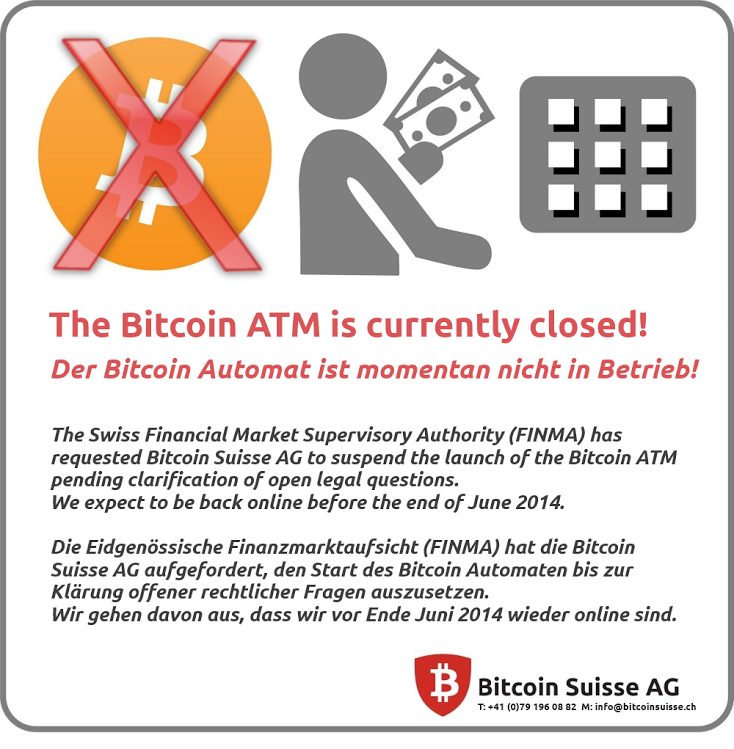 Though potentially troubling to those in the global bitcoin ecosystem, Bitcoin Association Switzerland president Luzius Meisser believes that FINMA's actions are not as reactionary as many fear and suggested that the authority is simply following its usual course of action when faced with new services and technologies:

"Some news sites reported that FINMA demands a banking license to run an ATM, but I think that is unfounded speculation and it would surprise me if it were true."

Meisser went on to suggest that this is just the latest example of FINMA being "extra-cautious when it comes to bitcoin" while it learns more about the technology.

However, he added that he believes that, under current law, bitcoin ATMs can be run for non-commercial purposes, provided they earn less than a certain sum in fees annually and don't allow the exchange of bitcoins between users. Commercial providers, he said, should be able to operate provided they join self-regulatory organisations.

The news that Bitcoin Suisse AG would be forced to halt its services comes at a time where bitcoin seems to be facing increased scrutiny in the global banking and finance center.

Earlier this May, a government report concluded that it would be illegal for Switzerland-based bitcoin companies to pay workers in the digital currency. Though, it did suggest that bonuses and other forms of bitcoin compensation would not violate current regulations.

The Swiss Parliament is however considering treating bitcoin as a foreign currency, a move that what was widely hailed as progressive by local bitcoin enthusiasts and activist groups.

Meisser said that this proposal has since been sent to a federal council after passing a preliminary vote, and that he is optimistic that the results could reopen bitcoin ATM services in the country:

"Should the federal council answer as suggested, that would immediately clarify a lot of legal questions and put Switzerland into the pole position to becoming an international centre for cryptocurrencies."