Furthermore, the average price on Mt. Gox was shown to be higher than Bitstamp and BTC-e by $21 and $34 respectively. This phenomenon has been referred to as the ‘Mt. Gox Premium’, which posits that restrictions on US dollar withdrawals have led to bitcoins trading at a higher price on Mt. Gox than the other exchanges.

The ‘Mt. Gox Premium’ is increasing

In last week’s article we looked at data from just over a three-month period, covering late August through to early December. Looking at a more recent one-month window of data, depicted in the chart below, we see a more than doubling of the average price difference between Gox and BTC-e of $70.

In short, the Mt. Gox premium has increased significantly in recent weeks. 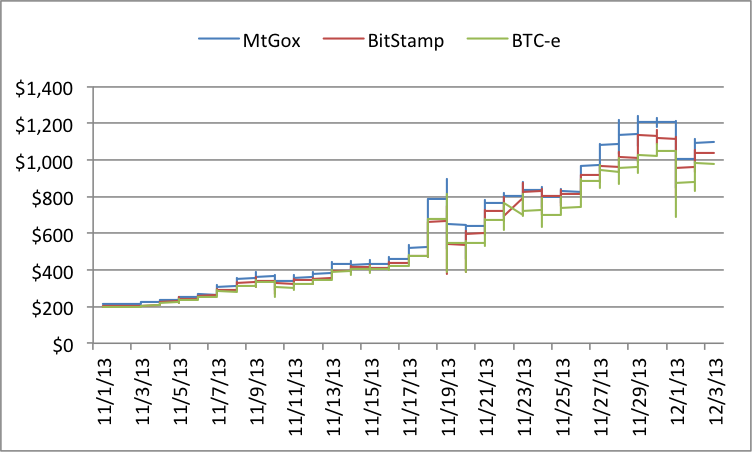 Price variations are not the only way in which Mt. Gox stands out from other exchanges.

It is well known that bitcoin is volatile; the price of a bitcoin is prone to significant fluctuations over short periods of time. But how should bitcoin price volatility be expressed?

For securities like stock, volatility is often expressed by its beta coefficient (or ‘beta’). Beta is a measure of an individual stock’s price volatility against a broader market measure, which is typically an index like the S&P500.

Should we calculate beta for bitcoin?

To calculate a beta coefficient for bitcoin, a number of inputs and assumptions are required – such as a risk-free rate of return. In today’s Zero Lower Bound world, central banks have effectively set nominal interest rates as very close to nothing.

There is also the question of which index to measure bitcoin’s volatility against. Should the Dollar Index (DXY) be used? Or perhaps a basket of alternative assets?

In addition, over what time period should we measure bitcoin volatility? Bitcoin has gone through relatively lengthy stretches of flat price performance.

For example, the relative price lull between the March-April period and the recent October-November run-up, where volatility skyrocketed. Volatility measured during the May-September period will yield a very different picture than volatility during the November-early December timeframe.

In sum, calculating a beta for bitcoin at this point in time would appear to offer dubious value.

Some bitcoin exchanges are more volatile than others

Again utilizing data from the CoinDesk Bitcoin Price Index, we can compare volatility across the three component exchanges (Mt. Gox, Bitstamp, and BTC-e).

In short, the greater the standard deviation, the higher the price volatility on the exchange.

Looking at minute-by-minute price data for the period from 27th August through 5th October (a relatively steady state period when the price for a bitcoin was comparatively flat) we see that the standard deviation for Bitstamp and BTC-e are roughly inline at $4.43 and $4.16, respectively.

A volatility mystery at Mt. Gox?

But what explains the significantly greater bitcoin price volatility on Mt. Gox?

One of the first explanatory variables to examine on questions of volatility is trading volume. Specifically, lower relative volume could be one factor behind higher volatility, as deep, liquid markets will often bring together more buyers and sellers across a greater range of prices.

Mt. Gox, while not possessing the same dominant 80% share of bitcoin trading volume that it did earlier in the year, still reports total volume market share of 20%-30% of all bitcoins traded.

In other words, if the Gox market share estimates are correct then it would seem unlikely that volume data would explain the higher volatility.

What explains Mt. Gox’s greater volatility? Please share any thoughts you have on why Gox is more volatile than other exchanges in the comments.

Subscribe to Crypto for Advisors, our weekly newsletter defining crypto, digital assets and the future of finance.