This post is part of CoinDesk's 2019 Year in Review, a collection of 100 op-eds, interviews and takes on the state of blockchain and the world. Galen Moore is a senior research analyst at CoinDesk Research, focused on developing metrics and analysis for crypto asset investors. Christine Kim is a research analyst for CoinDesk. She focusses on producing data-driven insights about the cryptocurrency and blockchain industry.

2019 has been a historic year for cryptocurrency and blockchain technology.

Global state leaders such as President of the People’s Republic of China Xi Jinping and the President of the United States Donald Trump have made public statements addressing the dynamics of this revolutionary tech. Traditional tech companies such as messaging app giant Telegram and social media giant Facebook have made bold promises to integrate crypto into their line of products and services.

All this is just scraping the surface of all that went on in crypto-land over the past 12 months. From our family to yours, the CoinDesk Research team presents you with what we believe are the 10 most influential events of 2019. In a later post, we'll give a sneak peak at what we’re expecting for 2020. 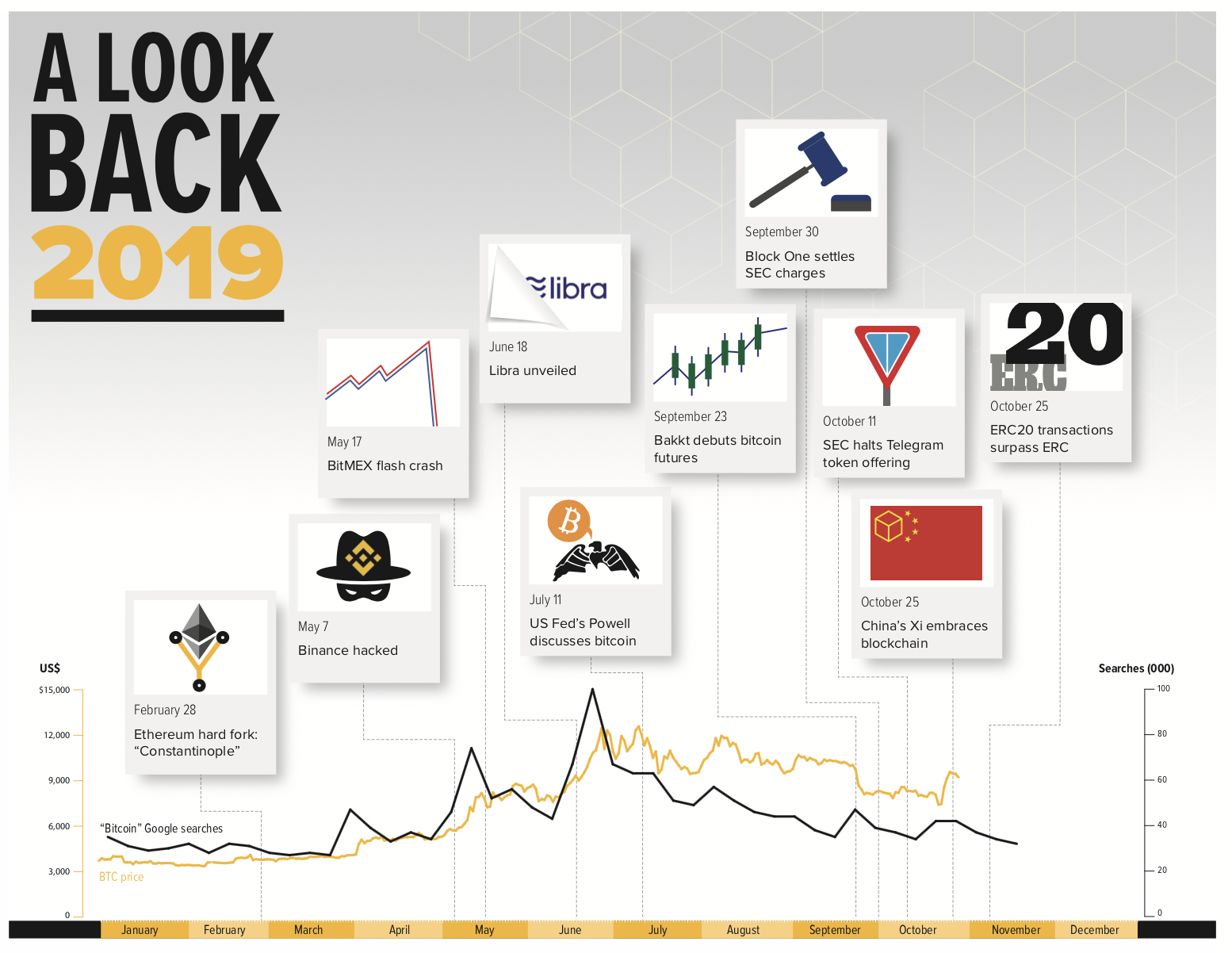 After multiple failed attempts, the second largest blockchain in the world by market capitalization executed its sixth system-wide upgrade, also called a hard fork. Dubbed Constantinople, the hard fork was executed as two upgrades, one after the other, in order to patch a critical vulnerability discovered mere hours before the upgrade was scheduled for activation.

$40.7 million in bitcoin was stolen from the world’s largest cryptocurrency exchange by volume, Binance. Using funds from a separate pool of Binance resources called the Secure Asset Fund for Users (SAFU), all losses were refunded to users by the startup. CEO of the company Changpeng Zhao said in a letter at the time: “In this difficult time, we strive to maintain transparency and would be appreciative of your support.” Market reaction to this hack resulted in bitcoin prices dropping almost $300.

A sudden and large sell order for bitcoin through cryptocurrency exchange Bitstamp caused bitcoin prices to drop overnight by 15 percent. Going from $7,700 to $6,600 in just 15 minutes, the positive mood amongst cryptocurrency traders changed drastically overnight. The cause of the flash crash is still highly speculated and debated in the crypto industry.

This summer, social media giant Facebook unveiled its first and only cryptocurrency project called Libra. Libra is architected to be a permissioned blockchain network able to facilitate cross-border payments through its “low-volatility” cryptocurrency. Shortly after the Libra unveiling, U.S. regulators called on Facebook CEO Mark Zuckerberg to testify before Congress about the project. How Libra development will continue moving forward in spite of regulators’ concern and hesitation is still to be seen in 2020.

The Chairman of the U.S. Federal Reserve Jerome Powell gave a testimony about Libra before the Senate Banking Committee. While he said the project raised “a lot of serious concerns,” Powell also made comparisons driving the narrative of bitcoin as digital gold. Crypto industry figureheads such as CEO of Digital Currency Group Barry Silbert tweeted at the time, “How far we’ve come,” in response to Powell’s statements about bitcoin.

This transaction 'flippening' is a milestone for the world’s second largest blockchain network.

The Intercontinental Exchange-backed bitcoin warehouse, Bakkt, finally launched in September after several delays and over a year of questioning from U.S. regulators. Bakkt opened its doors offering physically-settled bitcoin futures for the first time to U.S. institutional investors. Three months into its launch bitcoin futures trading volumes on Bakkt hit a record high of $124 million.

The most lucrative initial coin offering (ICO) in history was conducted by EOS blockchain creator, Block.One. This year, the charges laid against the startup by the U.S. Securities and Exchange Commission for its ICO sale, which reportedly raised $4.1 billion, were finally settled. The penalty? Block.One was fined by the SEC and required to payback 0.58% of the initial raise, which amounted to $24 million.

The second largest token offering in history was conducted by messaging app giant Telegram. After raising a reported $1.7 billion for its “TON” ICO, Telegram was scheduled to launch its cryptocurrency this October. However, the U.S. Securities and Exchange Commission sued the company for its unregistered securities sale and ordered a halt to token distribution. Charges laid against Telegram by the SEC have yet to be settled.

President of the People’s Republic of China, Xi Jinping, gave his first in-depth remarks about blockchain technology this year. Unlike most other state leaders, Jinping encouraged China to “seize the opportunity” afforded by blockchain. He stressed that implementation of “the rule of law” into blockchain systems was integral to the technology’s development. To this end, China is currently developing a digital version of its national currency, the renminbi.

In November, the number of Ethereum-based tokens transactions exceeded the number of native ether transactions on the ethereum blockchain. First identified by blockchain data startup CoinMetrics, this transaction “flippening” is a milestone for the world’s second-largest blockchain network. It suggests users of ethereum may finally be using the technology for its intended design; that is, a development and execution platform for decentralized applications.

Read more about
Year in Review 2019

APT$16.46
2.19%
View All Prices
Sign up for The Node, our daily newsletter bringing you the biggest crypto news and ideas.
By signing up, you will receive emails about CoinDesk product updates, events and marketing and you agree to our terms of services and privacy policy.