Mike Tyson: I’m Grateful to be Part of the Bitcoin Revolution

Mike Tyson says he is grateful to be part of the “bitcoin revolution”, though he admits he’s “no guru” just yet.

The ex-heavyweight champion of the world spoke with CoinDesk prior to the launch of his first branded bitcoin ATM in Las Vegas yesterday morning.

Positioned inside the Off The Strip restaurant, the Lamassu machine has been billed as Tyson’s “George Foreman grill” – and bitcoin’s bridge into popular culture.

Many have accused the digital currency of having a branding problem, with Silk Road and Mt Gox still raw, but Tyson disagrees. The issue isn’t so much about branding, he says, as education.

“People don’t really understand a currency based on numerical equations. I personally still don’t … but I’m grateful to be a part of the revolution and hoping that my participation in this space will lead to more conversations and help increase knowledge and awareness.”

“In no way do I profess to be any kind of bitcoin currency guru. It just seems very interesting and I’m intrigued with the possibilities,” he added.

The machine, which promises cash-to-bitcoin faster than the controversial boxer’s knockout record, joins six others in Sin City.

100 more machines are reportedly being planned. Profits will be an “even split” between Tyson and Bitcoin Direct, according to the company’s CEO, Peter Klamka. He told the launch crowd:

“Mike is a universally known boxer and celebrity whose fan base extends across a broad demographic. People around the world of all ages recognise him.”

Bitcoin Direct came under fire when the partnership was first announced in July. Pundits speculated the announcement could be a scam at Tyson’s expense, noting the patchy Internet trail of Klamka’s other firm, OTC stock Bitcoin Brands Inc.

Clearly, Tyson hasn’t been put off. He says he already knew about the currency prior to meeting Klamka, drawn in by the idea of having options beyond the banking system. “Options are a principle of democracy.”

This also applies to those excluded from the banking system, or those that don’t necessarily want or feel as though they have need to a bank account, he said. Though he’s not swapping all his dollars for crypto just yet:

“Just because I’m intrigued by bitcoin doesn’t mean that I have vowed off banks, nor am I encouraging anyone else to do so either.”

Click below to view a gallery of pictures from the launch. 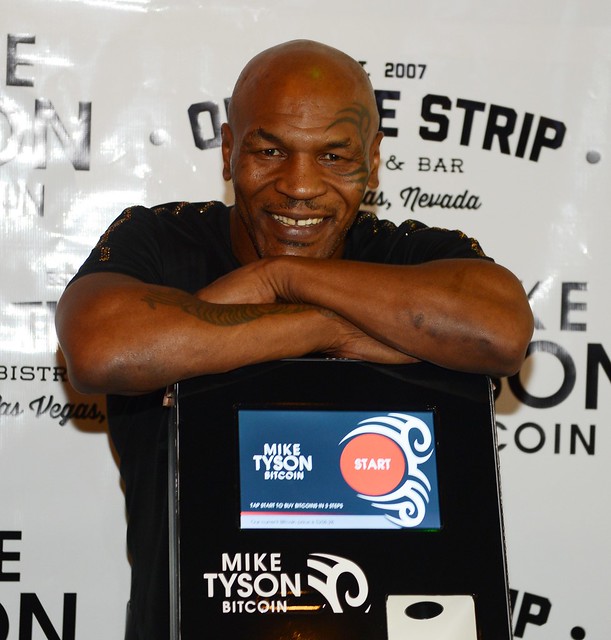 ATMsLamassuStartupsLas VegasBitcoin ATMsBitcoinNewsMike TysonEventsCompanies
Disclosure
The leader in news and information on cryptocurrency, digital assets and the future of money, CoinDesk is a media outlet that strives for the highest journalistic standards and abides by a strict set of editorial policies. CoinDesk is an independent operating subsidiary of Digital Currency Group, which invests in cryptocurrencies and blockchain startups.